Why do dogs wag their tails? Understand the powerful tail language 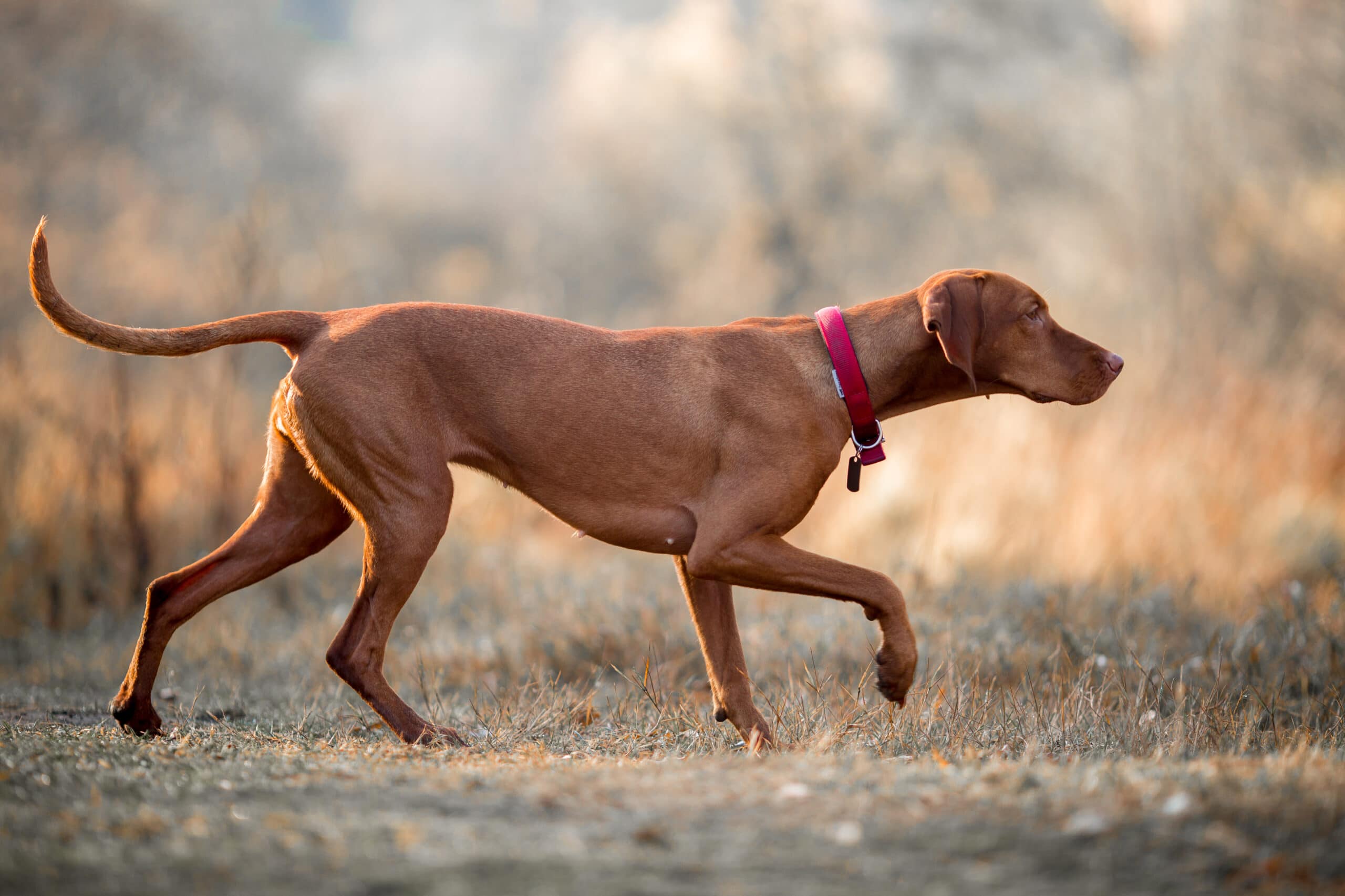 Out of sheer curiosity many of us would have asked ourselves “why do dogs wag their tails?”

We frequently associate a happy dog with a wagging tail. But, recent research has revealed that tail wagging does not always indicate that the dog is happy.

A dog’s tail is a tool for communicating feelings or strong emotions to other dogs and the owner.

Vets have long suspected that wagging is not always associated with a happy state of mind. Even dogs that are afraid or defensive will have a wagging tail when they see the vet. This is frequently misread, resulting in a potentially dangerous situation for both the vet and pet owners.

To answer the question “Why do dogs wag their tails?” we have to look at several aspects.

The science behind tail wagging

One of the rewards of dog ownership is the love that you receive from your pet. When you return home from a hard day, your enthusiastic furball greets you with drooly kisses and a wagging tail.

This interaction appears to be relatively straightforward. Your dog is wagging his tail because he is delighted to see you. But do you know that it’s not always that straightforward?

Yes, tail wagging can signal happiness, but it turns out that your canine friend’s tail can also express a range of other emotions and intentions.

A wagging tail does not always indicate that a dog is friendly; it might mean quite the opposite.

Original function of the tail

Let’s take a look at why a dog has a tail in the first place before we look at what your dog’s tail movements indicate.

The original function of a dog’s tail was to provide balance, similar to how many wild animals still use their tails today.

The dog could use the tail as a counterbalance weight when making quick turns, navigating small ledges, or going upwards.

Dogs’ tails became less critical for balance as they evolved, and they began to play a function in communication.

When a puppy is initially born, its tail does not wag at all.

Wagging doesn’t start until the puppies are at least a month old, when they begin to communicate with their mother and littermates.

They may then begin to wag their tails to “request” milk or food from their mother or signal to their littermates that there is too much rough or violent play between them and that they want to take a break.

Every dog has its own distinct scent, which serves as another means of communication between dogs.

In fact, a dog who tucks his tail between his legs doesn’t want to discharge his scent. This could be a means for the dog to avoid being detected.

As a result, mature dogs’ tails have progressed from a balancing mechanism to a vital communication instrument.

Puppies use their tails to communicate as early as a few weeks old. It’s also employed to disseminate their scent.

When a dog is relaxed, his tail will sit in a resting or neutral position. Depending on the dog’s breed, this position will change.

Some dogs’ tails are naturally curly and rigid.

In contrast, others have a long tail that droops behind them in their natural position.

When a dog’s tail moves from its neutral posture to a lower one, it indicates that the dog is submissive and not a threat.

When a dog is alert or excited, its tail is held higher than its natural position. This high tail frequently wags violently; a fast wag indicates that a dog is pleased or aroused.

This is something we frequently see at the park or while playing with our dogs. When they urge us to throw a ball or play chase, they’ll typically adopt a playful stance with their bottom lifted and a high tail waving.

This behavior is also visible when we greet our pets after being away for an extended period. It’s the dog’s way of telling us how much they missed us and how happy they are to see us again!

A curious dog will typically hold its tail straight out, indicating that it is interested in its surroundings.

When a dog’s tail moves from a neutral to a vertical posture or arches over the back, it signifies that the dog is potentially aggressive.

The bigger the threat, the higher the tail.

Is the dog’s tail wagging happily and going back and forth?

Is the wagging accompanied by movement of the body?

If a dog’s tail is wagging and the rest of its body appears relaxed or moves in sync with the wagging, you’re dealing with a happy, content dog.

A pleasant, relaxing tail wag is generally accompanied by a happy grin on the face.

When the dog’s tail wags rapidly and other positive signals are present, the dog is usually happy.

While the height, speed, and position of a dog’s tail might provide a general indicator of the dog’s intention and level of comfort, people should not determine how safe it is to interact with an unknown dog only on the basis of tail input; individual norms must be taken into account. Dogs indicate their degree of comfort in a variety of ways; the tail is just one of them.

1. Height of the tail

The position of your dog’s tail in relation to the rest of its body can reveal a lot about its mood.

A dog with its tail lifted high, and wagging often signals an energetic and cheerful canine open to petting and receiving affection.

The higher the dog’s tail is held, the more self-assured it is.

The lower it is held, the more frightened or fearful the dog is likely to be.

The tail tucked between the legs and held all the way down signals that the dog is scared. This tail stance is frequently seen when a dog encounters a dominant dog or when you punish your own puppy.

Remember, just because a dog’s tail is up doesn’t imply they’re feeling friendly.

The dog is highly attentive and aroused if its tail is held high and straight with minimal wagging, perhaps only at the tip. This could indicate that the dog has detected a threat and is preparing to defend itself.

2. Stiffness of the tail

You may have observed that the stiffness of the dog’s tail in the example above showed how the dog was feeling. When interpreting your dog’s tail language, stiffness is another valuable clue.

A stiff wag, or a stiff tail with no wagging, is usually indicative of anxiety.

It’s advisable not to approach a dog giving a stiff wag because it could be hostile.

A loose, casual wagging, on the other hand, is often a favorable sign. This indicates that the dog is at ease and is likely to be friendly.

3. Speed of the tail

Another technique to decipher your pet dog’s distinctive tail language is to look at its speed.

When your dog is excited, such as when you get home from work or when you’re going to feed them dinner, you may notice that they wag their tail really quickly.

A fast wag usually signals happiness, whereas a slow wag could imply that a dog is nervous or hesitant.

4. Direction of the tail

Is it important which way a dog’s tail wags? It appears to matter when it comes to dog-to-dog communication, according to one study.

According to researchers, dogs displayed varying emotional responses depending on whether another dog’s tail was wagging to the left or right.

Dogs who saw another dog wag to the right seemed to relax.

The left side of your dog’s brain is linked with positive emotions like love and serenity, so a happy dog wags his tail to the right. Tail wagging to the left indicates negative emotions.

When dogs observed another dog with a left tail wag, they showed anxiousness, stress, or anxiety.

Keep in mind that tail movement is just one part of a dog’s overall body language.

Rather than interpreting the tail alone as an indicator of how a dog is feeling, it’s crucial to analyze tail movements in the context of the dog’s complete communication strategy.

That entails considering a dog’s facial expressions, ear position, body position (chest and limb placement), and the context in which you’re approaching the dog.

You can tell a dog isn’t friendly if they’re waving their tail high and wagging it back and forth while baring their teeth and growling.

Even though a slow wag is usually associated with caution, a drowsy dog may do so just because they’re tired.

It’s the same with a human smile: while we think of it as a sign of happiness, it’s not always employed that way, depending on the situation.

We hope that we have been able to answer your question, “why do dogs wag their tails?” A wagging tail is just a dog’s way of providing social signals to other dogs and communicating their emotional state.

Before touching a dog, always check with the owner first, since a misreading of a tail wag can result in a painful bite!

Children are frequently the victims of such misunderstandings. We all must ensure kids understand that they may only touch a dog if they have been told it is okay.