How to stop a dog from jumping up on strangers? 6 tips 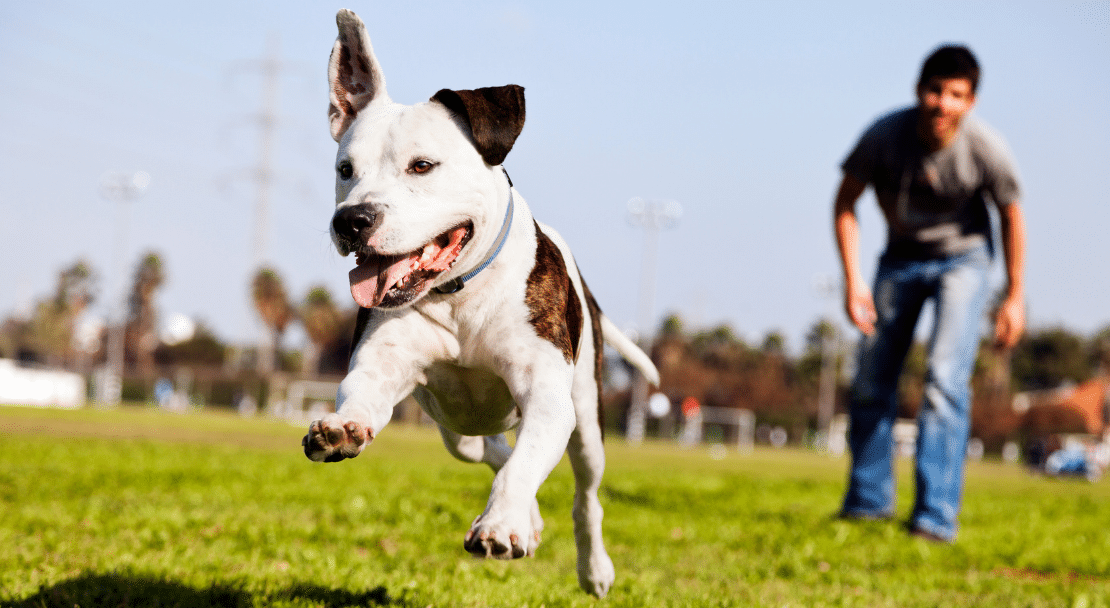 A common behavior problem dog trainers notice is dogs jumping up on people.

Jumping up on humans can be a challenging behavior to break.

Few behavioral issues are more embarrassing and many pet parents seek solutions on how to stop a dog from jumping up on strangers.

The good news is that dogs who jump on strangers aren’t usually suffering from anxiety or aggression; instead, jumping up is a (slightly more straightforward) training issue.

Jumping up is a natural behavior for dogs and young dogs jumping up at each other all the time. This is generally a straightforward behavior issue that can be resolved – and we’ll show you how!

Why does my dog jump up on strangers?

There’s a simple explanation why dogs leap on humans when they want to greet them: there’s a significant height difference between humans and dogs.

Trying to get up close

There’s no way for a dog to get up close while we’re standing straight on both legs and they’re on all fours. So they have to jump.

When a dog sets his eyes on someone they like, their tail starts to wag and they want to show how happy they are.

Many dogs will do this by licking a person’s face profusely. This may appear unclean to those who aren’t dog lovers, but it’s simply your dog showing their devotion.

As puppies, dogs are licked clean by their mothers and groom one other as a form of bonding. They’re simply trying to pass on this behavior to their human parents.

But there’s more — remember that dogs use their noses to learn about the world. When out walking your dog, pay attention to how he interacts with other dogs at the park or on the street.

Dogs will usually take a good, forceful smell of their canine companion’s face in addition to sniffing each other’s bottoms. Leaping up when near people is their attempt to make eye contact and do the same thing.

They’ll take a long, deep whiff of your scent and pick up on any pheromones that will tell them how you’re behaving. Fear, for example, smells different to a dog than light amusement.

5 reasons why your dog jumps up on strangers:

1. Your dog learned it when he was a puppy

This tendency to jump up most likely began when your dog was a puppy when he naturally greeted people by leaping on them and obtaining a lot of positive attention.

A puppy’s cute behavior can become a real nuisance when they get older.

We’ve all been guilty of allowing adorable puppies to crawl all over us, lick our ears, and sit on our chests.

When your dog gets bigger, it loses its cuteness, but your dog still thinks it’s cute!

Leaping on humans is not good canine behavior and can be dangerous if the dog is large or the recipient is shaky.

2. People who encourage the behavior

Some strangers don’t mind when a dog leaps on them, making it difficult to break the behavior.

Many well-intentioned strangers sometimes try to convince embarrassed dog owners that it’s okay if their dog jumps on them.

However, by reinforcing undesirable jumping up behavior, these kind-hearted dog-lovers make it far more challenging to train your dog not to leap!

Many pet owners unintentionally teach their dogs to jump and then sit.

The basic idea (treat your dog if he sits) is sound. However, execution is frequently imperfect, causing your dog to jump first and then sit (then get a treat).

When you see your dog, you get excited.

When you see that wagging tail at the end of the day, it’s so easy to squeal and become delighted!

However, your joy at seeing your dog may be part of the reason she’s leaping all over you.

Being cool and collected during canine welcomes is more likely to result in a positive outcome.

5. Trying to lick your face

When dogs get enthusiastic, they lick their faces and ears.

Have you ever seen a puppy greet an older dog when the puppy is excited?

Both wolf cubs and dog puppies lick their parents’ and other family members’ mouths and ears with delight. This not only aids the parents in throwing up the hunt, but it has also evolved into a greeting ritual!

Because we’re much taller than our dogs, when they try to lick our faces, they jump.

To recap, your dog leaps because it’s a natural activity with major hereditary components, and we mistakenly encourage it, making it a difficult habit to break.

Is a dog jumping up on strangers a sign of aggression?

It can be frightening when a strange dog leaps upon you, especially if you’re a child and the bouncing canine is quite large and heavy.

If you’re not aware of your dog’s intentions, add in other unpleasant behaviors like barking at people on walks, and you have a genuinely terrifying situation.

Are they exhibiting the usual symptoms of hostility, warning of an impending attack?

Fortunately, the majority of the time, the answer is no.

When a dog jumps up at a human, it is nearly always an act of social excitement.

You should aim to train this undesirable behavior out of your dog’s routine.

When a dog is preparing to attack a human, warning indications such as growling, snarling, and anxious barking will precede the leap.

Some owners use one of two conventional methods to try to keep their dog from jumping up. Unfortunately, for reasons that we’ll explain later, these strategies don’t work.

So, if you wish to prevent your dog from jumping up at people, don’t use the following traditional methods:

1. Bringing your knees up

When confronted with a jumping dog, a typical reaction is to lift your knees as the dog charges towards you. The idea is that the dog will hit your knee instead of your soft, squishy stomach.

The primary disadvantage of this procedure is that you risk injuring the dog, especially if he is a miniature breed.

You could even wind up with a wounded knee if the dog is large and heavy. In many cases, the individual being jumped on ends up on the floor.

On the other hand, pushing and shoving are likely to urge a young dog to “play” even harder.

If you’re a muscular young man, getting physical is fine, but what about a toddler or a fragile older adult? The knee-jerk reaction isn’t going to work.

So why not ignore the dog?

To some extent, ignoring the dog can work since the happy canine will eventually stop doing things that aren’t rewarded.

On the other hand, ignoring the dog is only part of the solution, not the entire solution.

Furthermore, some dogs enjoy springing up at you, even if they receive no response. Because the game is primarily about getting a reaction from you, the dog will most likely keep jumping until he gets one.

If the dog is a large, hefty breed, you and your family may suffer severe damage.

Keep your cool at all times.

When you start to raise your voice or even shout, the dog will become excited and jump up even more.

Keep your cool, utilize the “off” command, and provide positive reinforcement when he comes to a halt.

Additionally, never hit or scold your puppy for the jumping up behavior. If you do this, you may provoke a defensive and terrified response from the dog.

Even negative attention such as raising your voice to scold him reinforces this jumping behavior.

So, what are the options?

You’ll need patience and determination to teach your dog not to jump up on strangers.

If you train your dog consistently, you’ll end up with a best friend who keeps his front paws to himself.

Training your dog to stop jumping up at you requires time and effort.

Although these skills are best learned when your dog is a puppy (dogs’ minds are like sponges in their early years, and they quickly get set in their ways), it is still feasible to train an adult dog to stop jumping up at you on sight.

The most important thing is to stay as calm as possible. That means no tickles, kisses, or nose rubbings, as this is what your dog wants, and they’ll think you’re rewarding them by allowing them access to your face.

Similarly, never yell or punish your dog for jumping. To your dog, yelling at him is the same as giving him attention.

1. Begin socializing as soon as possible

Socialize your dog early so that they learn how to interact politely with people.

You should also ask guests to follow the training routine that you are following with your dog.

Dogs are quick learners who may be calmed after their initial excitement.

When it comes to reducing undesired jumping, having some rewards on hand might be beneficial.

Toss a treat to your dog as soon as he stands in front of you with all four paws on the ground.

Also, praise your dog, but keep it low-key.

You may cause another round of jumping if you show too much excitement or attention.

It helps if you can put your dog in situations where he can practice. For example, if the jumping occurs most frequently after you get home from work, spend a few minutes coming and departing multiple times a day.

If your dog leaps up, don’t make a big deal about it and step back outside.

When your dog has his four feet on the floor give him a reward.

Repetition is essential in any training method.

Put a closed door or baby gate between you and your dog if you have turned your back once or twice and he is still jumping on you.

4. Include a command to sit

Another solution for your dog’s jumping behavior is to teach him a different incompatible behavior such as sit.

Ask your dog to sit once he keeps four paws on the floor for a few seconds or more.

Give the order “sit” when you walk into a room or through the front door. Make sure to reward your dog with a treat as soon as he sits.

Over the course of numerous training sessions, practice this. Your dog will begin sitting as soon as you walk through the door or enter the room if you practice enough.

You can also teach them to sit when visitors arrive at the house.

Other techniques include teaching them to stay put or to sit in a specific area of the room, such as a bed or blanket.

5. Distract with a toy

If all else fails, try distracting your dog with a toy.

When your dog approaches you or when someone enters your home, keep it in your hand.

You can divert your dog’s attention away from jumping up and toward the toy.

6. Get other people to help you

It is insufficient to practice on your own with your dog. This training should also include friends and family members. Otherwise, your dog may learn that jumping up on you is not acceptable, but jumping up on everyone else is.

Having other people assist with this training teaches your dog to keep all four paws down regardless of who enters the room.

However, your guest should stay calm and avoid interacting with your dog or making eye contact until your dog has calmed down.