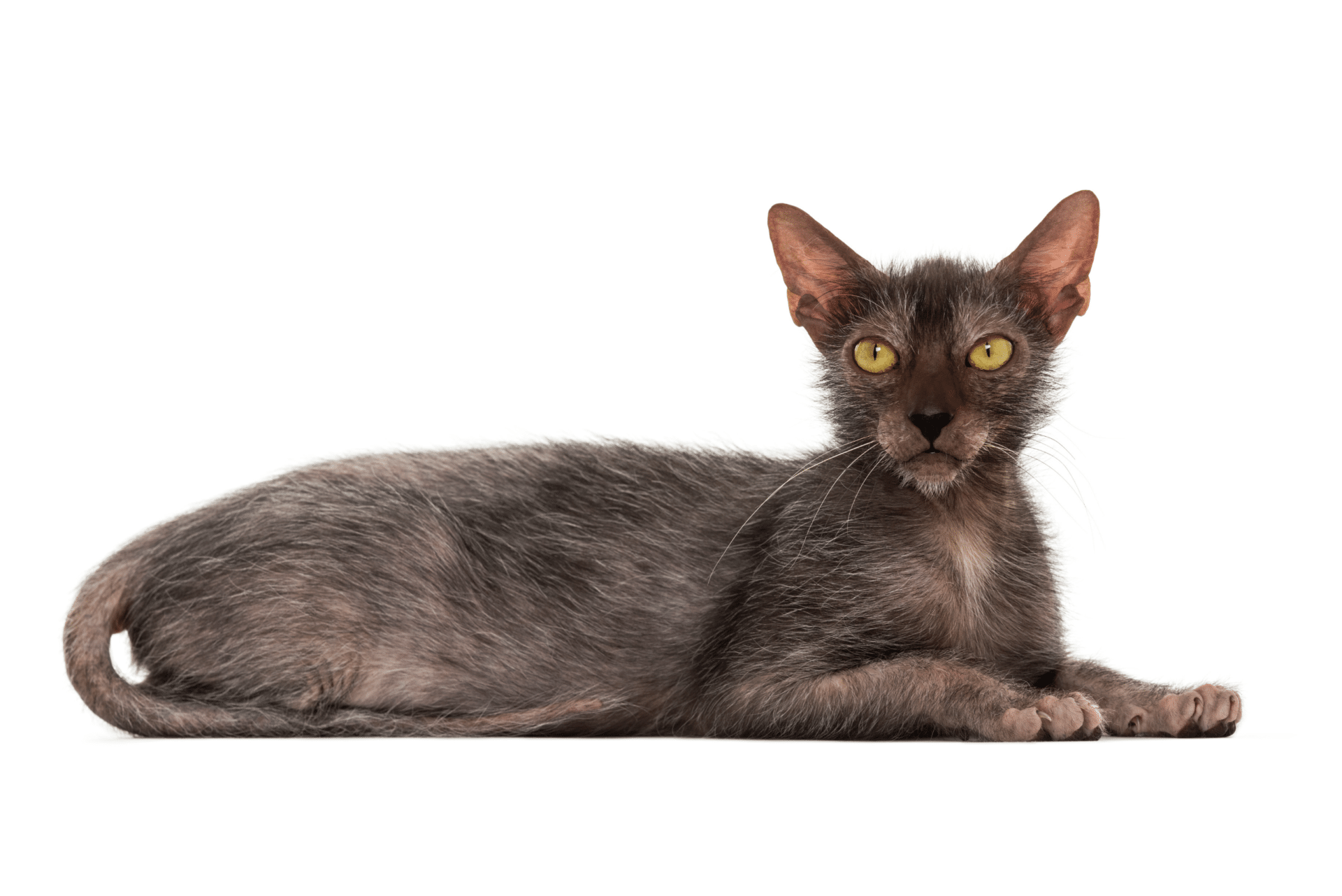 The Wolfcat breed or the Lykoi cat gets its name from its resemblance to a Wolf. It is also known as the Werewolf cat.

The hairless areas around the eyes, nose, and mouth give the Wolfcat breed the looks of a werewolf.

The partial hairlessness is the result of an unusual genetic mutation.

Wolfcat breed: At a glance

Lykoi is a Greek word that translates as “wolf cat.” This is an apt term for the Wolfcat breed, described as feline werewolves.

Cat breeder Patti Thomas named and co-founded the Lykoi. It is the result of breeding many domestic cats born with a mutation that makes their fur unusual.

The first pair: The first pair (Silver Lining Wolfie and Ray of Hope) were born to a black domestic cat (Eve Havah) in 2010. Patti Thomas, a cat breeder in Virginia, purchased the two cats from a rescue center. He suspected that they carried the same mutation as the Devon and Sphynx.

Dr. Lesley Lyons of UC Davis, California, conducted genetic studies on the two cats. He found out that the Lykoi did not have the same gene as the Sphynx or Devon Rex.

Later, Patti Thomas tied up with veterinarian Dr. Johnny Gobble and his wife, Brittany. The three of them agreed to co-own the cats and develop them as a new breed.

The first Lykoi kitten: The Gobbles adopted two more cats from Tennessee with the same unusual coat. These cats – Hillbilly Moonshine and Opossum Roadkill – established the Lykoi breed. The Gobbles also bred two unrelated cats to make sure it was the same gene. Finally, on September 14, 2011, the first Lykoi to Lykoi kitten was born.

Because the relevant gene is recessive, the kittens must receive a copy from each parent. Similar cats arise in feral cat populations from time to time, adding to the gene pool. Outcrossing to black domestics ensures that the gene pool is broad and large.

Lykoi is currently bred across the United States, Canada, and France. This is to broaden the gene pool and ensure healthy kittens.

Semi-hairless: The Wolfcat breed or Lykoi cat is a semi-hairless cat. There is only one coat of fur (there is no real undercoat).

Little facial hair: Often the Wolfcat breed doesn’t have hair around the eyes, chin, nose, muzzle, and behind the ears.

Leathery skin: Their exposed skin, ears, and nose have a leathery texture.

While the skin is generally pink, it can darken with sun exposure.

Lykoi cats are regular shedders. They can shed their entire coat a couple of times a year before growing it again for the next season.

Certain Lykoi cats have more hair than others. Some are almost fully haired, while others have thin patches of fur on their bodies.

Medium-size: Although Lykoi is a medium-sized cat, males are often larger than females.

The body: As is typical of feral cats, their bodies are thin and powerful. Their tail is shorter than the body, and their legs are moderate in size compared to the body size.

The Lykoi’s ears are broad, tall, and pointed, giving them a distinctive facial look. Many people believe that this contributes to their “wolf look.”

Friendly: They are friendly, affectionate, and lively cats who get along with humans and other animals, despite their feral appearance.

Likes being around people: They enjoy being among people, but they can also be content playing alone with any toy or object in the room.

When there are multiple Lykoi, they get along fine. Because they will fetch, hunt, and chase like a wolf on the hunt, Lykoi can appear to have dog-like characteristics.

Loves the sun: They, like other cats, adore the sun and seek it out. T

Protective: hey guard their humans and toys, yet when asked, they will share.

High prey drive: Wolfcat breed or Lykoi cat trace their origins to the feral population of cats. As a result, these cats have an intense prey drive.

They take great pleasure in stalking their cat toys, other pets, and humans. You need to watch the Lykoi when it’s near smaller animals!

Cautious: They are also cautious when confronted with unfamiliar situations. They prefer to assess the unfamiliar before entering but warm up to new people and pets.

Though bred to keep the friendly nature, the Lykoi still have some traits of their feral cat days.

High energy: The Lykoi, as a somewhat high-energy cat, is an active pet.

Independent: They don’t hate it if you scratch or pet them, but they’d rather be doing something else than sitting on your lap.

Because the Wolfcat breed is so new, it is currently unknown how long a Lykoi can live.

A Lykoi could live between 12 to 15 years if kept in a safe and healthy environment.

No cat is disease-proof regardless of how well you care for it. The Wolfcat breed is no exception.

Because they have greater skin exposure than an average cat, you must protect them from the cold and the sun.

Lykoi hair coats tend to thicken in the winter and tan in the summer.

Heavy shedding: Most Lykois shed a lot so that they become bald, particularly in the summer. This is a breed characteristic and not a disease.

Protect from sun: Due to the sparse coat, ensure to protect the Lykoi from the sun, the cold, skin oils, and incorrect grooming.

Weekly brushing: As for grooming, the Wolfcat breed needs weekly brushing. Gentle brushing is recommended, so you don’t irritate or harm the cat’s skin. If you need help with techniques, consult your veterinarian.

Additionally, the sparse coat leads to oil buildup in the ears and nails, so they must be kept clean and checked.

Oil accumulation: If you notice oil accumulating, wipe the nails with a cloth and clean the ears. You’ll also need to give your Lykoi regular baths to keep oils in check due to the cat’s lack of hair.

In 2014, The International Cat Association (TICA) gave the Lykoi “Preliminary New Breed” designation. The Lykoi was elevated to “Advanced New Breed” the following year. The next year, TICA elevated them to Championship status.

The Cat Fanciers Association (CFA) accepted the Lykoi as a “miscellaneous” breed in May 2018.

At present, only the grizzled black roan conforms to the breed standard. But there is a push to have more colors.

What is the price of a Wolfcat breed or Lykoi cat?

A kitten can cost around $1,500, while a healthy adult can cost up to $2,500. Visit The International Cat Association (TICA) website for list of Lykoi breeders.

If you do get a kitten and need a really cool girl cat name, check out this article for name ideas.

They are not hypoallergenic. Most people who suffer from cat allergies will also have allergies to Lykoi.

A small number of people state that their Lykoi cat does not make their allergies worse. But this is not enough to say that cat-allergic people can own one.

Lykoi shed a lot, sometimes even more than the average domestic shorthair.

Are Lykoi cats suitable as pets?

The Lykoi cat has a lively and playful nature.

They are curious, intelligent, skilled hunters and like playing fetch.

They enjoy the company of people and form strong bonds with their owners. They may be cautious around new people and pets at first.

These friendly cats make loving companions. They are like any other house cat except for the cute werewolf looks.