Why is my cat sneezing so much all of a sudden? 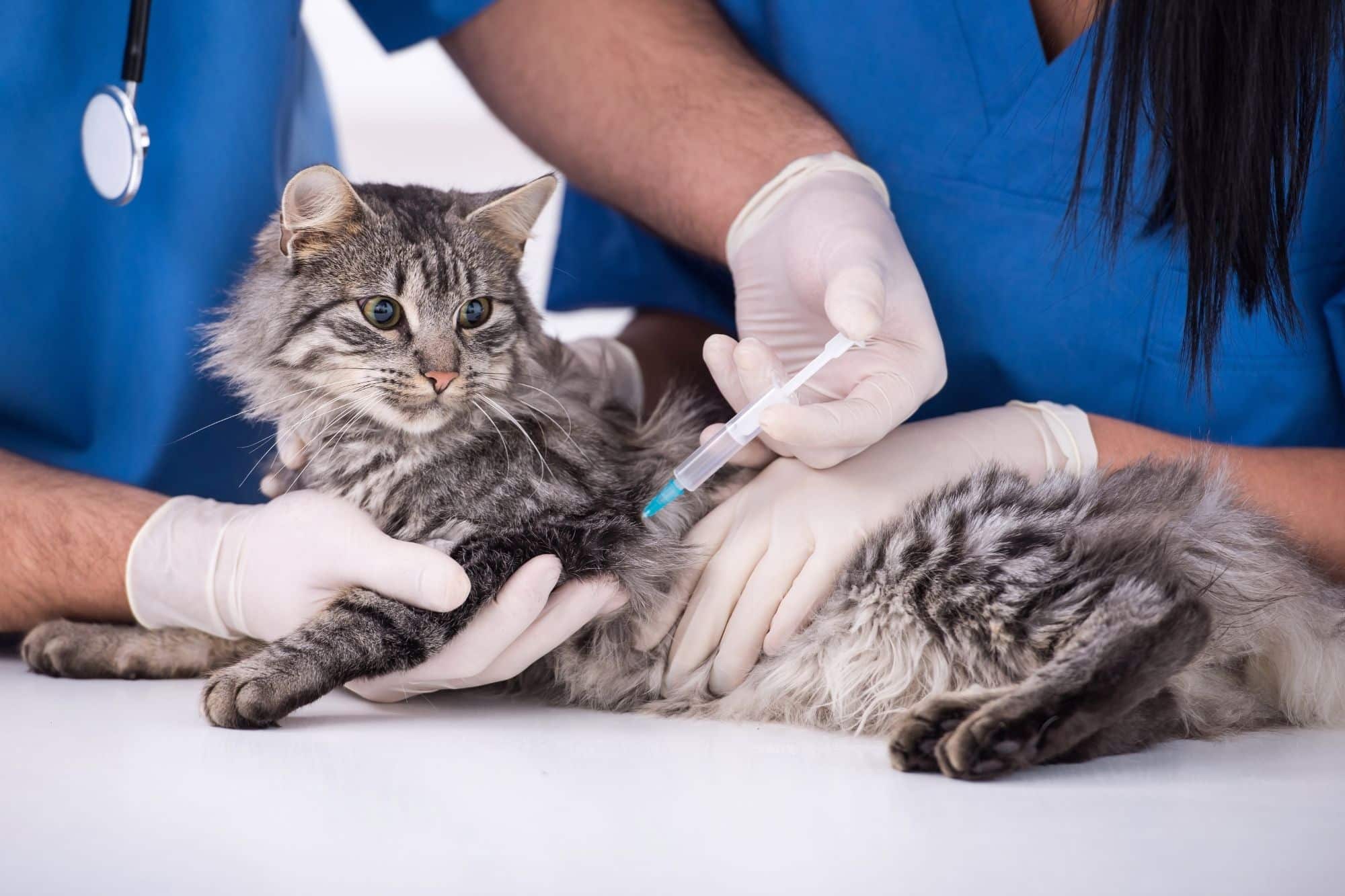 Sneezing is a reflex that is shared by all creatures with a nose.

A healthy response, sneezing is designed to eliminate tiny unpleasant objects from inside a cat’s nose.

A cat’s occasional sneeze is nothing to be concerned about. On the other hand, a cat sneezing continuously is never normal and can raise the worrying question, “Why is my cat sneezing so much all of a sudden?”

This article discusses the most prevalent causes of cats sneezing and how cat owners should react if their feline friend begins to sneeze.

What exactly is a sneeze?

Although everyone understands what a sneeze is, a definition can help to clarify what is happening.

A sneeze is a reflex (you can’t make yourself sneeze) that occurs in response to irritation of the nasal channel lining.

The reaction begins with a slow, strong inhaling of breath into the lungs, followed by rapid, forceful expulsion of air via the nose.

During a sneeze, any small, loose particles in the nasal chamber are ejected quickly into the surrounding environment.

To answer the question why is my cat sneezing so much all of a sudden, we need to first look at what can trigger sneezing in the first place:

What causes cats to sneeze? Is there a consistent pattern?

You don’t have to be bothered about the odd sneeze – it could just be something in the air disturbing your cat’s nasal passage.

Look for trends if it’s more than just an occasional sneeze:

Dust or perfume: Patterns can help you figure out whether your cat is sneezing because of an irritant like dust or perfume or if it’s related to an infection or another underlying issue.

Cleaning products: If your cat sneezes more when you clean the bathroom or when he goes to his own bathroom, he could be reacting to a chemical in the cleaning goods or dust in the litter.

Signs of infection: Sneezing accompanied by other symptoms could indicate that your cat has an upper respiratory infection or some underlying condition that necessitates veterinary attention.

How to stop sneezing in your cat?

If your cat’s sneezing isn’t too bad, you can stop it by preventing the irritation that is causing it in the first place.

When should you take a sneezing cat to the vet?

If you notice any of the below changes in your cat’s behavior, contact your veterinarian immediately to discuss treatment options.

Your vet will conduct a physical exam on your pet and check its vital signs. They may also take blood samples to test for diseases.

What about a blood-sneezing cat?

It can be scary to see blood flowing out of your cat’s nose.

If your cat has repeatedly been sneezing before you saw the blood, consider it, along with any other discharges from his eyes or mouth, to be a serious symptom of a health concern.

It could be due to a foreign object or disease, but it could also be a sign of poisoning, cancer, or excessive blood pressure.

Get your pet examined by a vet immediately.

Is cat sneezing a serious condition?

It depends on whether the cause is an illness or an environmental factor.

The irritants that cause the cat to sneeze are sometimes environmental, such as dust, mold, or pollen, which the cat inhales and causes them to sneeze. Sneezing is usually not a significant problem in these situations, mainly if it occurs seldom.

However, sneezing in cats caused by one or more illnesses requires medical attention. The usual cause is a viral infection, followed by inflammation and bacterial infections that destroy the nasal cavity lining and upsets the regular mucus layers.

What kind of changes would I see in a sick cat?

Weird position and movements: The cat may sit in a slumped position, move weirdly, fail to elevate its head properly, tilt its head, or carry its tail in an unusual manner. There isn’t always a single thing that jumps out but rather a series of small changes.

Dehydration: When a cat is sick, dehydration is a common problem. Gently hold your cat’s skin at her shoulder blades, pull it up and away from her body, then let go to test whether she’s dehydrated. Dehydration, which must be handled quickly, is indicated by skin that does not snap back into place but remains “tented up.”

Weight loss: Cats suffering from a chronic illness may experience gradual weight loss that is only noticeable when running your hands over the ribs and spine.

My cat seems to be in excellent health. How do I know if something is wrong?

Although cats are predators, larger predators will prey on them in the wild. Because sick or elderly animals are easy prey, any visible evidence of illness will alert other predators that the animal is sick. As a result, cats have developed the ability to mask signs of disease and pain. In the early stages of illness, a cat owner may simply observe that the cat has become quiet and withdrawn.

Unfortunately, this implies that a cat could become very ill before its owner notices anything is amiss.

Regular medical examination: One of the main reasons the American Veterinary Medical Association and other veterinary experts recommend twice-yearly wellness examinations for the average adult cat is that veterinarians can pick up subtle signs that a cat is developing a health problem.

Develop a basic understanding of symptoms: If you have a basic idea of how cats express sickness symptoms, you’ll be able to recognize early warning signals and know what information to give your veterinarian.

What changes in my cat’s friendliness or energy level can indicate that he’s sick?

Withdrawn: Sick cats tend to withdraw and hide, though this might vary depending on the individual cat’s personality.

Clingy: Some cats become more clingy or needy, while others simply get irritable.

Decreased energy: Cats who are sick, on the whole, have decreased energy levels. The only difference you could notice is that your cat sleeps more, plays less, or is restless.

Hyperactivity: Some disorders, particularly hyperthyroidism, cause your cat’s energy level to rise to the point of hyperactivity. Cats with hyperthyroidism are prone to restlessness at night and may start wailing or waking up family members.

What kinds of eye changes might a sick cat have?

Droopy eyelids, green, yellow, or white discharges, squinting, dilated or constricted pupils, or anisocoria (one pupil dilated while the other is constricted) are all symptoms that something is wrong.

Sick cats frequently have elevated third eyelids placed beneath the lower eyelid and conceal part of the eyeball.

Any irregularity with the eyes can result in blindness; consult your veterinarian right away if in doubt.

What should be my response if my cat is constantly sneezing?

If your cat continues to sneeze after being evaluated by your veterinarian, x-rays of the sinuses may be taken to detect whether they are filled with fluid or air.

If fluids are discovered, antibiotics may be prescribed to help clear them out.

To dry out the mucous membranes inside the nostrils, your veterinarian may recommend nose drops.

When it’s cold, do cats sneeze?

Although cats do not sneeze routinely in cold weather, it is possible that this is the cause of a sneeze. It depends on the cat, how chilly it is, and how much mucus it generates naturally.

Sneezing can be exacerbated by these two situations. A sneeze is a perfectly normal and healthy reaction. Because its nose is more sensitive, mucus might build up and need to be drained.

Watch your cat as the weather changes. When the air conditioner is set to a certain temperature, does it sneeze? Does your cat sneeze more in the winter or fall? If this is the case, your cat’s sneezing could be caused by temperature variations.

When a cat has a cold, do they sneeze?

Although cats do not catch colds, they can become ill. Regular sneezing is one of the more obvious indicators of an upper respiratory illness in cats. They even have their own strain of influenza.

Most forms of cat flu are infectious and can be spread through contact with eye, mouth, or nasal secretions.

If a sick cat shares food or drink, sneezes, and deposits mucus on trafficked surfaces, even indirect contact is sufficient.

Aside from sneezing, cat flu causes the following symptoms:

Sneezing and coughing from a cat with cat flu spreads contaminated mucus throughout the house.

It’s preferable to confine a sick cat to a room that can be disinfected once the infection has been treated. Of course, the cat will require medical attention.

The treatment will be different based on the etiology of the flu. In most cases, your vet will prescribe antibiotics and supportive therapy.

If your cat is sneezing and swallowing a lot, it may be trying to clean fluids from its throat.

Take your aging cat to the vet if it is continually sneezing. Young and aged cats are the most vulnerable to cat flu. Unless a subsequent illness is triggered, cats who receive therapy usually recover quickly.

When cats are stressed, do they sneeze?

Cats that are constantly stressed, on the other hand, are more susceptible to viruses and diseases. These can cause sneezing as a symptom on their own.

If you feel your cat is stressed, you should address the situation swiftly.

Do cats sneeze to get pet owners’ attention?

To catch your attention, some cats may imitate particular behaviors.

Sneezing is not an attention-getting activity for cats. This is because it is an uncontrollable reaction. A cat will not imitate or fake a sneeze to get a response from its owner. Even if you give your cat a favorable response when he sneezes, it cannot produce a fake sneeze.

Do cats sneeze when they have hairballs?

Hairballs can make your cat cough and hack at inconvenient times. Sneezing may appear to be a natural complement to this, but they are unconnected.

A hairball is a sticky, dense mass of swallowed fur covered with digestive secretions and mucus. There isn’t a single portion of a hairball that would cause a cat to sneeze. That is unless the cat has a physical problem and fluids find their way into its nostrils. The chances of this happening are rare.

Get your cat inspected by a veterinarian if it exhibits unusual behavior or struggles to evacuate a hairball.

Occasional sneezing in cats is normal and there should be no reason to worry. However, if the sneezing is continuous and accompanied by symptoms of illness, you should immediately consult your veterinarian to have your cat fully checked. We hope that we have answered your question, “Why is my cat sneezing so much all of a sudden?” to some extent and provided you with a basic understanding of sickness symptoms in cats.