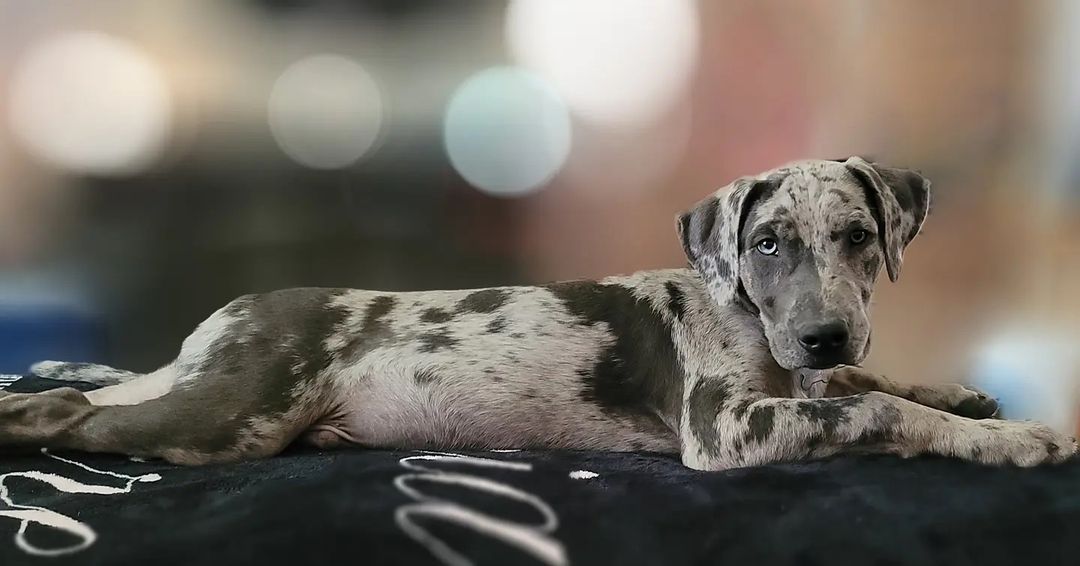 Catahoula mixed with Lab results in a hybrid dog breed called the Labahoula.

The Labahoula combines the gentle nature of a Labrador with the physical agility of a Catahoula Leopard Dog.

The Labahoula is not a dog for the faint of heart; they are high-energy, robust dogs who will require ongoing training.

These dog breeds are best suited to a rural lifestyle or suburban homes with vast backyards.

History of the Catahoula mixed with Lab (Labahoula breed)

Because these designer hybrids are so new, the history of the Labahoula (Catahoula mixed with Lab) is a bit of a mystery.

Since this hybrid dog breed is only registered with the Dog Registry of America, it’s possible that it was developed in the United States.

A few words about the parents

The Labrador Retriever is the most well-known dog breed in the United States.

The Lab may be traced back to the St. John’s Water Dog, which was used as a fish-net retrieval dog for the fisherman in Newfoundland, Canada.

This canine, named after the Labrador Sea, has a tumultuous history, nearly vanishing in the 1880s due to ownership taxes.

The Labrador Retriever was re-established in North America in the early 1900s thanks to the efforts of English breeders who saved the line from extinction.

The Catahoula Leopard Dog is a big herding dog with Nordic Wolfhound lineage.

During the 1970s in Louisiana, these dogs were known for their diverse tracking, hunting, rescue, and herding abilities.

The Catahoula Leopard dogs are the only purebred dog breed that can trace their origins back to Louisiana in the United States.

Based on the Labahoula’s parental history, this hybrid breed can be perfect as a companion dog, watchdog, guard dog, or hunting dog.

What to expect from a Catahoula mixed with Lab?

Catahoula mixed with Lab puppies can result from unintended pregnancy or a conscious decision to cross the breeds.

When breeders purposefully cross them, they may hope that the mixed breed pup will inherit specific features from each parent; the striking markings of the Catahoula and the Lab’s easygoing friendliness, for example.

You won’t know which parent they will resemble in adult size and temperament until they’re fully grown. That’s why it’s critical to learn everything you can about both parent breeds before adopting a mixed-breed puppy.

Appearance of the Labahoula breed

The Catahoula mixed with Lab or the Labahoula hybrid is large, powerful, and attractive.

It is a stunning dog that is sure to attract attention.

The Labahoula is a breed that can grow 24 inches tall and weigh up to 95 pounds.

Labahoula dogs tend to have a large wedge-shaped head, long muzzles, and ears that flop down to the level of the jaw-line.

This hybrid has two distinguishing characteristics.

The Labahoula has a thick double coat, which is short and close to the skin. The coat may also be water-repellent, a trait inherited from the Labrador parent.

If adequately socialized during puppyhood, the Labahoula will grow up to become a calm, friendly dog tolerant of children and other pets.

It’s crucial to be cautious when your dog meets someone new because the Labahoula has a highly dominating and alpha-like disposition. You will have to tone down this nature through training.

These dogs are loyal to their human family, but they can become bored and destructive if left alone for too long.

Because of their dominating nature, owners should closely oversee Labahoulas when other dogs, pets, or children are nearby.

Low shedding: They shed very little and seasonally, making them an excellent choice for pet owners who are allergic to dog hair.

Minimal grooming: The breed does not need to be groomed every week and bathed only when necessary. Too much bathing will remove the oils that keep the Labahoula’s coat water-resistant.

Dental care: It is also essential to brush your Labahoula’s teeth a few times a week to prevent dental diseases.

Nail care: If exercise does not wear down your Labahoula’s nails, you should trim them every few weeks to prevent tearing and splitting.

Ear care: Finally, check your Labahoula’s ears every 6 to 12 weeks for the presence of debris, wax build-up, or infections.

Foot care: Also, check their feet for any signs of injuries.

How big does a Catahoula mixed with Lab get?

Examining the parents is the most accurate technique to estimate how big puppies will grow.

A giant Lab and a large Catahoula will produce large puppies, while two little dogs would produce small puppies.

Both Labs and Catahoulas have sexual dimorphism. As a result, female puppies in a litter are often smaller than male puppies when fully grown.

The Catahoula Lab mix (Labahoula), like all dogs, requires a varied and well-balanced diet to keep happy and healthy.

Meats, healthy fats, and plant-based fiber, as well as a variety of vitamins and minerals, should all be included in your pet’s diet.

High-quality kibble can conveniently meet your dog’s nutritional needs. Look for kibble made with high-quality components, with meat (not by-products) at the top of the list.

Naturally, not all dogs are created equal, so be sure you’re obtaining the correct kind of formula for your Labahoula.

Since the Catahoula Lab mix is a high energy breed, you should choose food designed for active dogs but appropriate for the size and age of your dog.

Ensure you’re feeding him a high-quality meal that’s free of fillers like carbs and grains, or he’ll be constantly hungry.

Because your dog comes from two breeds with a history of joint issues, diets containing glucosamine as an ingredient are an excellent choice.

As Labs are notorious for their voracious appetites, don’t free-feed your Labahoula; instead, provide two or more meals throughout the day to ensure that he eats the correct quantity.

They don’t require more than 3 to 4 cups of high-quality kibble each day on average; check the manufacturer’s suggestion for exact amounts and follow it.

Because of the Labrador parent, Labahoulas may be at an increased risk of obesity. So feed them the highest-quality food you can afford, and keep an eye on the calories to keep them at a healthy weight.

If you have a puppy, ensure to feed age-appropriate food. As the puppy matures, see that the food contains fish oil, glucosamine, and chondroitin ingredients.

Overfeeding your Labahoula is not a good idea as this can exacerbate health problems such as elbow and hip dysplasia.

If you are concerned about establishing or changing a Labahoula’s diet, it’s always a good idea to get advice from a veterinarian.

While dog food makers and pet bloggers provide helpful feeding recommendations, you should view them as only suggestions rather than expert advice.

After all, each dog is unique, with its own set of requirements.

A veterinarian is the only person who can identify your dog’s exact nutritional needs. So, before deciding what to put in your puppy’s bowl, always seek advice from a veterinarian.

The Catahoula mixed with Lab or Labahoula is a cross between two intelligent breeds known for following directions in their roles as retrievers and herders.

However, the Labahoula has a mind of his own, and while diligent repetition will eventually yield results, you might wish to hire a professional trainer to assist you.

You’ll have a wonderful family dog once the Labahoula is socialized and obedience trained.

If you decide to train him on your own, stick to a rewards-based approach and lavish him with praise and treats to get the results you want.

For the best results, focus on positive reinforcement and rewards-based training.

The Labahoula is a medium-sized dog that will weigh 50-90 pounds when fully grown, depending on whether your dog is male or female.

These intelligent, athletic canines require a lot of mental stimulation and physical activity.

Daily exercise of at least 90 minutes is required for the Labahoula to work off his excess energy.

A Labahoula’s usual lifespan is 10-14 years.

The Labahoula is not a breed for couch potatoes. It is a highly active dog.

They require owners who are strong, confident, and willing to take on the role of alpha.

Due to their size and need for physical activity, these breeds will do well in a rural or suburban environment, where they will have plenty of space to wander and keep their energy level down.

Labahoulas are generally a healthy breed with no known concerns, but if you’re considering a mixed-breed dog, you should do your research on any health issues.

Hip and elbow dysplasia can affect both the Labrador retriever and the Catahoula Leopard dog, with certain Catahoulas having a genetic disease that produces a deformed hip joint.

Also, Catahoulas with white markings on their coats have a higher chance of being deaf.

It’s critical to keep up with frequent vet visits (especially as your dog approaches senior status) to identify and treat any potential health issues early.

The good news is that mixed breed dogs like Labahoulas live longer than purebred dogs due to a phenomenon called hybrid vigor.

Here is a training video of a Catahoula mixed with Lab

What is the cost of Catahoula mixed with Lab puppies?

Puppies of Louisiana Catahoula Leopard Dogs range from $400 to $2,000, depending on the parents.

Labrador Retrievers are priced similarly to Golden Retrievers and vary from $500 to $1500 depending on bloodlines.

Labahoulas or Catahoulas mixed with Lab breed can make excellent household pets if trained and provided plenty of physical and mental stimulation.

Labahoulas are best suited for active households who can devote the time and training that this breed requires.

Despite his friendly nature, the Labahoula can be wary of strangers, a trait that combines well with his protective nature to make him a good watchdog.

Consistent training and early socialization with other adults and children are critical to preventing your Labahoula from “protecting” the family when unnecessary.

The Labahoulas enjoy the company of its owners and do not like being excluded from family activities.

Is Labahoula a child-friendly breed of dog?

Yes, the Labahoula is well-known for its ability to get along with children.

They are perfect companions for older children who know and understand how to approach a dog.

Is the Labahoula good with other pets?

The answer is both yes and no.

They tolerate pets who have been raised up along with them.

Bringing in new pets after your Labahoula has established himself, however, may be more difficult.

When purchasing a Labahoula puppy, keep in mind that they can live up to ten years.

What is the maximum size of a Labahoula?

Male Labahoulas can attain heights of 22 to 26 inches and weigh between 65 to 90 pounds.