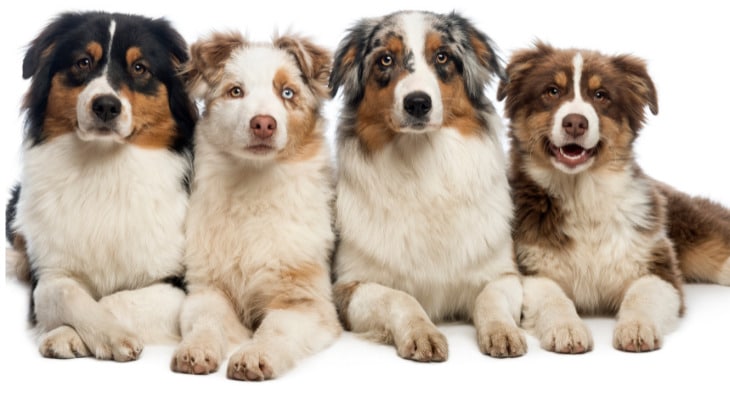 The Australian Shepherd is a medium-sized dog breed that has been used to herd animals for generations. As a result, this dog is known for its guarding behavior and high energy levels.

So, are Australian Shepherds aggressive?

Australian Shepherds aren’t considered aggressive. Instead, they are pleasant and affectionate. They tend to be very protective of their territory and owner.

Australian Shepherds have a herding instinct. As such, they may attempt to herd and be pushy with smaller animals and even their owners. As part of this process, they have been known to nip. If they have not been adequately trained or socialized early, herding and nipping are more common.

Not for inexperienced owners

Because of their natural stamina and strong personality, many owners are immediately overwhelmed by the Australian Shepherd. This breed may not be appropriate for a first-time owner, a sedentary person or household.

They make excellent companions if you are able or willing to take them in.

Thankfully, Australian Shepherds are not a dangerous breed, and they like pleasing their owners. They are intelligent dogs who understand which activities make their owners happy and can get them positive reinforcement of treats and attention.

As you can see, getting to know the temperament of your Australian Shepherd ahead of time can help you control or even avoid aggression in your pet.

So, let’s take a deeper look at the typical Australian Shepherd temperament before moving on to potential aggressiveness triggers and proactive measures for limiting or eliminating bad behavior.

The temperament of an Australian Shepherd

Australian Shepherds are clever, athletic, and hardworking dogs who thrive when they are kept occupied, with plenty of physical activity and mental stimulation.

Australian Shepherds, as previously said, are herding dogs that were bred to work and transport animals. So herding living beings is in their nature, even if it is you and your family.

This isn’t to argue that owning sheep is a must for owning an Aussie (though it may help). However, you must keep them occupied. They need to be suitably stimulated because they have a lot of energy. Otherwise, expect barking and possibly even destructive behavior.

Similarly, any dog breed with a natural instinct to herd animals will be bossy and dominating unless they are kept active. They will attempt and may succeed in assuming the dominant role in the family if the owner is not firm or does not establish his role as the leader. This makes them difficult for first-time or anxious owners.

However, they are highly social and playful and enjoy walking, hiking, jogging, and playing games such as frisbee.

Despite their stubborn nature, Australian Shepherds live to please their humans. Hence, they respond well to training.

These dogs make excellent companions when well trained since they are highly loving and loyal to their owners.

With the proper training using positive reinforcement, Australian Shepherds may respond to commands quite well.

To get the best out of Aussies, start the training sessions at an early age. This allows them to grow into lovely dogs with lots of energy who are also well-behaved for their owners.

Aussies are known for being gentle with their owners and other dogs. Strangers who are scary or appear to be a threat to the family, on the other hand, can bring out their violent side.

They will require adequate early socialization (as much exposure to various people, sounds, situations, and contexts as possible while they are still young). This will assist them in gaining confidence and behaving more appropriately at all times.

Do Australian Shepherds protect their owners?

Australian Shepherds are fiercely loyal to their owners, forming strong ties that make them seem like family rather than just a pet.

The Australian Shepherd’s natural wariness of strangers combined with the devotion to the owner makes them excellent guard dogs.

An Australian Shepherd may become aggressive if they see a stranger as a threat.

Aggression is a natural reaction for any dog who believes an unfamiliar person is attempting to harm them. Still, with proper training and enough socialization, these dogs may learn to apply appropriate judgment.

With patience and consistency, your Aussie will learn that refraining from lashing out at strangers will reap rewards.

The Australian Shepherd is a good pet for an active family who can keep the dog busy and provide sufficient exercise.

What causes aggression in Australian Shepherds?

Any breed of dog can develop aggressive behavior. There are frequently triggers, or conditions, that increase a dog’s likelihood of reacting in this manner.

The following are the leading causes of aggression in the Australian Shepherd:

Like most shepherd dogs, the Australian Shepherd is prone to stress, which does not help your dog feel good about themselves. Aggression is frequently a result of stress.

Your dog’s stress might build up until they’ve had enough, lose control, and lash out.

When your Shepherd is stressed, they may become irritable and grumpy.

It’s critical to recognize these pressures before things with your dog get out of hand.

Herding dogs tend to experience stress more than other breeds when exposed to leashes, people getting in their way, hitting, shouting, the hand of a stranger over their face or loud noises.

Cortisol, a stress hormone, is released when your dog is under stress. The “fight or flight” response is triggered when adrenaline is pumped into the system, and an animal must choose whether to fight or flee from whatever is threatening them.

In the beginning, the higher the stress levels in a dog, the more aggressive behavior will be seen.

When a dog is repeatedly exposed to stress, learned hostility becomes the dog’s preferred behavior. Aggression becomes effective; it quickly eliminates any threat and removes all fear the dog was experiencing, reinforcing the dog’s hostility.

Australian Shepherds who were not socialized early in life or have undergone trauma are likely to be anxious whenever they confront a new situation.

It could be as trivial as seeing a strange dog or hearing other dogs.

Unfamiliar dogs touching or staring at them, or another dog initiating play that is viewed as a danger, are examples of minor stressors.

However, this also applies to people.

When it comes to strangers, Australians are naturally wary. Unless they’ve been raised in an environment where they’ve been exposed to a wide range of people. Otherwise, they may feel afraid, which may lead to aggressive behavior.

Providing puppies frequent contact with friends, relatives, neighbors, and the rare stranger on a walk might improve their social skills and lessen the likelihood of developing this behavior as adult dogs

Australian Shepherds need plenty of mental stimulation, almost as much as physical. If left on their own, they may start acting out, including scratching furniture, chewing on shoes, table legs, or cushions.

This sort of aggression can develop when an Aussie is irritated at not having anything to do or is bored for an extended period.

It frequently affects dogs who spend a lot of time locked in a room, tied up, overly retained on a leash, or confined to limited space.

Any breed of dog can become irritable due to health issues, injuries, or diseases. This is common in dogs who have never displayed any aggressive behavior before but suddenly start excessive barking, snapping, or biting.

Pain is usually a factor; a dog in a lot of pain will want to protect himself and may react to defend or relieve himself.

So, if your Aussie begins to exhibit new or unexplained aggression, you should consult a veterinarian first. They will inspect your dog from head to toe. This should be done before attempting to resolve any behavioral issues.